Uveal melanoma (UM) is an aggressive cancer originating in the eye that leads to metastatic death in approximately 50% of the patients. The majority of primary UM cases (~90%) are driven by activated mutations in G-protein coupled receptor pathway genes (GNAQ and GNA11) and metastasized UM is strongly associated with inactivation or loss of the BRCA1-assodiated protein 1 (BAP1) (80% of cases). Although several therapeutic approaches including targeted therapies and immune checkpoint inhibitors are effective in skin melanoma, these approaches elicit low response rates in UM. Hence, there are no FDA-approved therapies for advanced-stage UM, and there is a critical need to discover or develop novel treatments.

Targeting cancer cell metabolism has been considered a promising treatment option in several cancer types based on results from pre-clinical studies and clinical trials. However, the potential of targeting cancer metabolism has been poorly studied in UM. Understanding the unique features of cancer cell metabolism compared to that of normal cells may broaden therapeutic options. Additionally, cancer type-specific genetic mutations may help identify additional targetable metabolic vulnerabilities. In our preliminary findings, we found that UM cells have increased lipogenic metabolic enzyme levels compared to normal choroidal melanocytes, and mutations of BAP1 are involved in heterogeneous metabolic changes in UM. This proposal includes two aims: (1) to define unique metabolic features of UM that can be targetable, and (2) to identify metabolic functions of BAP1 mutations in UM. For Aim 1, we will perform global lipidomic analyses and stable isotope tracking lipid synthesis assays in normal choroidal melanocytes and UM cells. We will also test inhibitors of lipogenesis and the synergetic effects of inhibiting metabolic processes and activated oncogenic signaling pathways on UM cell growth. We will study the possible roles of GNAQ/GNA11 mutations along with other frequently dysregulated oncogenic signaling pathways such as the PI3K/Akt/mTOR pathway, in upregulating lipogenesis in UM. For Aim 2, we will compare BAP1-deficient and BAP1 re-expressed UM cell lines previously generated, eliminating confounding factors due to cell type differences. We will also integrate RNA-sequencing, metabolomics, and molecular data of the cells to identify the metabolic roles of BAP1 in UM.
File not found.

Anna Han is a Post Doctoral Fellow at Thomas Jefferson University and a member of the Uveal Melanoma Working Group.  Anna studies the therapeutic options that target metabolism in uveal melanoma and in subtypes of BAP1-deficient uveal melanoma.

Dr. Takami Sato, MD, PhD.
Dr. Sato is a Thomas Jefferson University physician with a focus on the treatment of patients with metastatic uveal melanoma. He is also director of the Metastatic Uveal Melanoma Program at Thomas Jefferson University. He will contribute paraffin embedded liver metastatic tissues for immunohistochemistry and assist with the patient-derived tumor xenograft (PDX) uveal melanoma cell lines.

Dr. Michael A. Davies, MD, PhD.
Dr. Davies is a Professor and Director of the Department of Melanoma Medical Oncology, Division of Cancer Medicine, at the University of Texas MD Anderson Cancer Center (Houston, TX). The Aplin lab has been collaborating for previous and current projects with Dr. Davies to conduct reverse phase protein assay (RPPA). Samples for RPPA generated from studies in this proposal will be analyzed at the RPPA facility at MD Anderson Cancer Center. Dr Hu has a long history of collaborating with Dr. Davies as evidenced by their co-author publications.

Dr. Zachary Schug, PhD.
Dr. Schug is an Assistant Professor of Molecular and Cellular Oncogenesis Program at The Wistar Institute (Philadelphia). The Aplin lab has been collaborating for previous and current projects with Dr. Schug to perform lipid synthesis assay through stable C13-isotope tracking and LC-MS based lipidomics. Samples for lipid synthesis assay generated from studies in this proposal will be analyzed at the core facility at The Wistar Institute.

Dr. Solange Landreville, PhD.
Dr. Landreville is an Assistant Professor of the Department of Ophthalmology and Otolaryngology/Head and Neck Surgery Faculty of Medicine, Université Laval (Québec, Canada). She will contribute normal choroidal melanocytes and protein lysates for metabolomics and Western blot analyses. 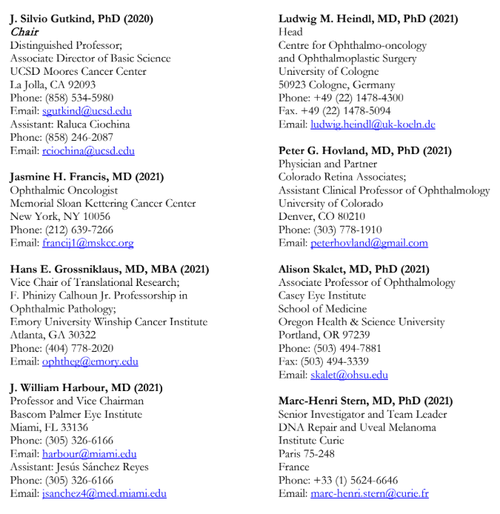 This is the 6th research grant OMF has provided in partnership with the AACR and the 9th grant since its founding 17 years ago by Dr. Robert Allen. To date, OMF has raised nearly $2 million to support OM patients and provided needed funding for OM awareness and research. OMF's research initiative has two goals: first, continue to research innovative ways to improve diagnosis and treatment options for OM patients and 2) support and encourage a doctor to choose OM as their specialty field.

Read about past research grant recipients and projects here. 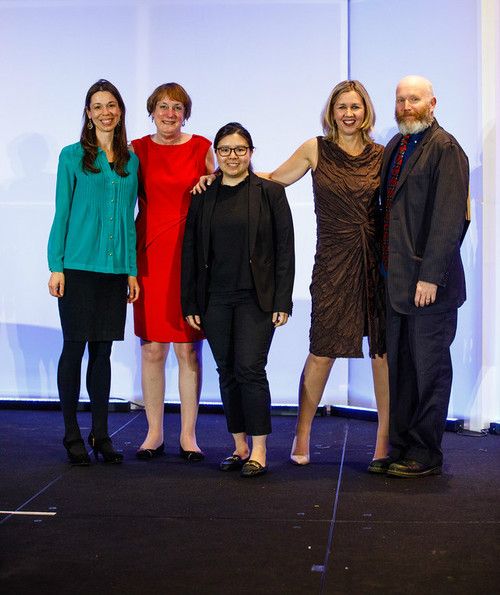 The Ocular Melanoma Foundation (OMF) is the leading research and patient support organization focused on eye cancer. OMF was established by Dr. Robert Allen, a renowned eye surgeon who was diagnosed with ocular melanoma (OM), a rare eye cancer diagnosed in 2,000 adults in the U.S. annually. Today, OMF is the #1 destination for uveal melanoma information online and a leading provider of patient education and support programs, including novel assistance programs for patient travel and ocular prosthetics. The ‘Eye Am Not Alone’ patient retreat is the largest gathering of OM patients and caregivers in the world and OMF has raised over a million dollars towards the fight against eye cancer while partnering closely with the American Association for Cancer Research (AACR) and the Rare Cancer Research Foundation (RCRF) to fund groundbreaking cancer research.