Ocular melanoma (or 'OM') is a cancer that develops in the eye. It is the most common eye cancer in adults and the second most common type of melanoma.

Like its more well known cousin, cutaneous melanoma, OM begins from mutations in your pigment cells, or melanocytes. However, OM is biologically distinct from skin melanoma and is not thought to be related to UV exposure. OM makes up about 5% of all melanoma cases and is most commonly diagnosed around 55-60 years of age.

OM eventually results in the mortality of approximately 40% to 50% of those it affects despite complete control of the primary tumor. However, no evidence of metastatic disease is demonstrable at the time of uveal tumor diagnosis in the vast majority of patients. Clinical metastases usually develop years after the diagnosis and treatment of their primary ocular tumor. Researchers estimate that undetectable circulating tumor cells, or “micro” metastasis, may have begun growing 2 to 3 years before the treatment of the ocular tumor in the patients who will go on to develop disseminated disease. A dilated eye exam is the best way to diagnose and catch OM in its early stages, which gives patients more options and typically drives better outcomes.

Anatomy of the Eye 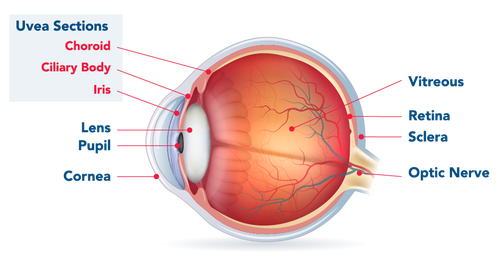 OM is an aggressive cancer that can involve any of three areas inside the eye (commonly referred to as uveal melanoma) or on the outside tissue of the eye itself (conjunctival melanoma, much more rare).

Uveal melanoma - The uveal tract is made up of three main sections, and OM can occur in any of them:  (1) iris (the pigmented area surrounding your pupil), (2) ciliary body (a thin tissue layer in your eye responsible for aqueous humor production), and (3) choroid or posterior uvea (the vascular layer of the eye between the retina and the white outer layer known as the sclera; this pigmented tissue full of blood vessels nourishes the retina).

Conjunctival melanoma - Melanoma can also occur in the thin lining over the white part of the eye (the conjunctiva) or on the eyelid, but this is very rare.  Conjunctival melanoma often presents as a raised tumor and may contain little or even no pigment. It most commonly occurs in the bulbar conjunctiva — the mucous membrane that covers the outer surface of the eyeball. Unlike other forms of ocular melanoma that spread most often to the liver (hepatic spread, i.e. by your bloodstream), when conjunctival melanoma spreads, it most often spreads to the lymph nodes and lungs.

OM is diagnosed annually in approximately 7,000 adults globally and 2,000 adults in the United States. This equates to about 5 - 6 cases per million people per year (but only 0.2 to 0.3 per million individuals in African/Asian populations) and, for people over 50 years old, the incidence rate increases to around 21 per million per year.  For comparison, skin melanoma occurs in ~150 per 1 million Americans each year.

The average age of diagnosis is ~60 years (median 55 years) and it affects both sexes equally or slightly more frequently males as per some reports. It is more common among light-skinned individuals, but it can affect individuals from any ethnicity. Cutaneous melanoma (CM) and OM share some risk factors such as fair skin color, blue eyes, red/blond hair, and freckling/many nevi. Unlike cutaneous and conjunctival melanomas which has increased in incidence over the past few decades, uveal melanoma has not shown this trend.

Where Does It Come From?

Melanoma is a type of cancer, most often of the skin.  Melanoma can also occur in the mucous membranes of the body (mucosal melanoma) and, of course, in the eye.

Similar to melanoma of the skin, OM is a little understood and silent killer. In the majority of cases, ocular melanoma develops slowly from the pigmented cells of the choroid (choroidal melanoma) but it also can develop from the pigmented cells of the iris and ciliary body. You may hear it called uveal melanoma because the uvea is a part of the eye containing two areas in which OM can commonly occur.

The melanocytes in your eyes are what give them their color. The exact cause of the mutation of these melanocytes is unknown, though. What is known is that exposure to ultraviolet (UV) rays (either from the sun or sunbeds) increases the risk of developing melanoma of the skin. People whose skin burns easily – people with fair skin, fair or red hair and blue eyes -- are most at risk, thus doctors recommend regular, yearly check-ins with an experienced ophthalmologist. However, there has been no conclusive evidence linking UV exposure and OM.

Ocular melanoma may be more common in people who have atypical mole syndrome, which is also called dysplastic naevus syndrome. People with this condition have a greater risk of developing a melanoma of the skin, and often have over 100 moles on their body, some of which are abnormal in size and shape.

How Serious Is It?

Approximately 50% of patients with OM will develop metastases by 10 to 15 years after diagnosis (a small percentage of people will develop metastases even later i.e. 20-25 years after their initial diagnosis). There is no cure for metastatic OM and overall mortality is also largely unchanged despite treatment advances in treating the primary eye tumor. More research is needed urgently to improve patient outcomes.
> Learn about Screening & Prevention
> Skip to learning about Diagnosis
Introduction
> Basics of OM
Screening & Prevention
Understanding Nevi
Initial Diagnosis
Tumor Characterization
Genetic Testing
Understanding Prognosis
Surveillance
Common Terms

Uveal melanoma is clinically and biologically distinct from cutaneous melanoma.

"Uveal melanoma represents the most common primary intraocular malignancy in adults. Although uveal and cutaneous melanomas both arise from melanocytes, uveal melanoma is clinically and biologically distinct from its more common cutaneous counterpart. Metastasis occurs frequently in this disease and once distant spread occurs, outcomes are poor."
Therapeutic implications of the emerging molecular biology of uveal melanoma (2011)