In Memory of Eleni Bekiou 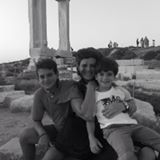 My sister Eleni, 40 years old, had been diagnosed with ocular melanoma at the age of 30. As OM has been linked to older ages and light eyed people, Eleni's case was considered extremely rare as she was only 30 years old and had hazel/ brown eyes. She completed radiation treatment in Zurich and consequently lost sight on her right eye. Thankfully she overcame the cancer and moved on with her life. While in remission, and seven years later, she brought her second child to the world. She was so happy with her beautiful boys and family and lived her life full of ambitions and dreams.
Eleni went to her doctor every 6 months for her routine check ups, with her last one, a liver ultrasound and blood work, in May 2014.

In August 2014, after having spent a great summer with her in Greece where she resides and while she was vacationing at the beautiful island of Lesvos, Eleni felt acute pains in her lower back and abdomen, and started vomiting with anything she would put in her mouth. When she visited the local hospital, they did another ultrasound where they discovered a huge tumor in the liver. They returned to Athens immediately, where she was diagnosed with metastatic ocular melanoma.

I will never forget her oncologist exact words as she described Eleni's case: Miss Bekiou, she said to me, it is as if a bomb has exploded inside her liver, just like in Boston's marathon. There is no healthy tissue to be found anywhere. I'm very sorry to tell you that your sister has only a few months to live, perhaps, 2,3,4...5 at the most!"

I could not believe that this was happening to my beautiful young sister, my little angel, my little flower, as I used to always call her.

Eleni was hospitalized after 20 very difficult days at home with major abdominal pain and lots of vomiting. She only did two treatments with Ipilimumab with no positive results at all. Conversely, it seemed as if the drug fed the cancer cells even more and the tumor inside her kept getting bigger and bigger. In the meantime, no food could enter her stomach and therefore she was put on an IV to provide her body with nutrients.

She never lost hope, even when under morphine, and never wanted to know the bitter truth. She only wanted to go home! She was hoping that come December she would be able to return to her home and go with her older son receive his grades from first semester.

In early November, her doctor decided to try the newly approved by the Greek FDA, Pembrolizumab. Nevertheless, around that time, her jaundice levels were pretty high, the red blood cells started to lower significantly, she was losing more and more weight, she continued vomiting even while on the IV, and as a consequence, they kept postponing the treatment.

Eleni got the chance to do only one reduced immunotherapy session 10 days before she passed away.

We were all hoping, until that very last day, that this new drug, might extend her life a bit more, but our hopes and hers were shuttered very quickly. She never managed to visit her son's school to get his grades.

Eleni was diagnosed with the metastatic melanoma at the end of August and, on November 29, 2014, she left her last breath surrounded by her family.

I took care of my younger sister till the very end.

For three consecutive months, I washed her, cleaned her, fed her, gave her water, rubbed her inflamed with ascites belly, her inflamed due to water retention legs, slept next to her while holding her hand all night long, laughed and cried, but mostly cried knowing I was living a nightmare. But I also took care and still do of her children while I now watch my parents come face to face with the grim reality of their daughter’s death.

Eleni, was a daughter, a sister, a mother, a wife, a cousin and a great friend and she will be missed dearly.​

Ocular Melanoma is a rare disease.  Therefore funding for research to find a cure is very limited at this time. Contributions in Eleni’s honor can be sent to the Ocular Melanoma Foundation. 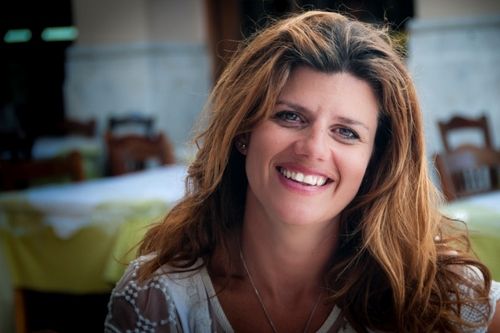